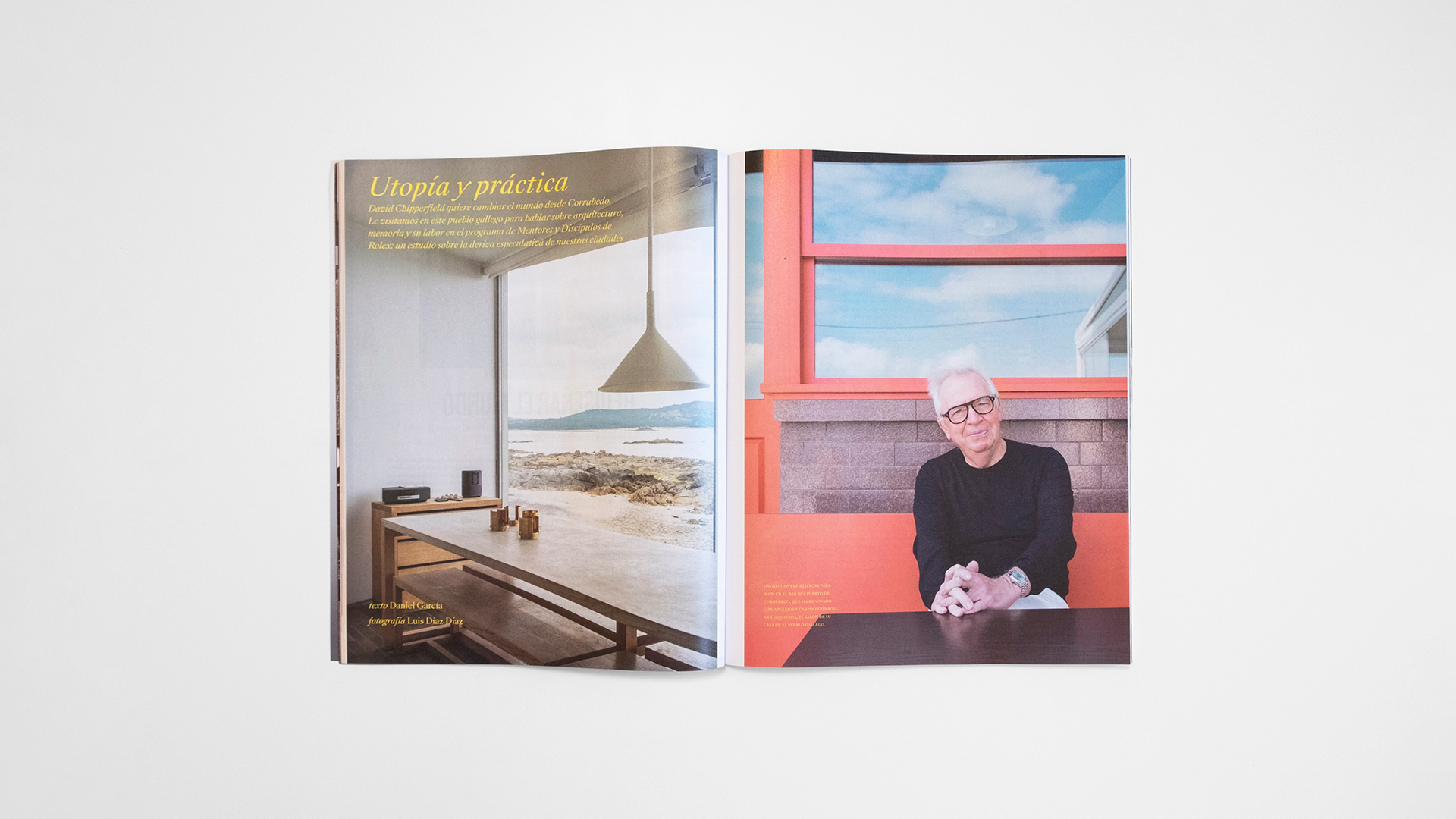 He styles himself “Sir” even on holiday. On the brightly coloured double cover of ICON Design, David Chipperfield sets out his commitment to the environment and social inclusion, through his community experience at Corrubedo. The simplicity of his bar and his summer home integrate seamlessly into the local context. The second is devoted to the brilliant creative Achilles Ion Gabriel. His living area is a mix of styles and unique aesthetics, providing a cool alternative to the inevitable parlour.

CORRUBEDO’s beauty lies in it not trying to compete with the landscape. The Galician village where the architect David Chipperfield has been spending the summer for some thirty years and he spent the pandemic does not have a nice square with little restaurants with kitsch coloured bulrush seats inspired in Santorini. Neither are there any white plastic sun loungers brought over from Ibiza. There are only three bars in Corrubedo harbour’s square, and one of those is Chipperfield’s. Red woodwork, a bench at the entrance and the typical tiles that adorn the fronts of the typical houses. But the Chipperfields (he, his wife and his children) are proudest of their Bar do Portos forming part of the “route (la ruta)”, in other words the select list of bars where the locals stop off when out for drinks. This is because our cover man’s involvement with Galicia goes beyond woodwork. Corrubedo is not just where he spends his summers, but a place for testing the region’s environmental protection and sustainable development measures – in other words, not just associated with tourism. Chipperfield is clearly an unassuming part of the community. This is represented by his house: from the sea, it seems as if it has just landed, but from the street you could think that it has always been there. Apart from its pristinely aesthetic architecture, David Chipperfield’s respect for the surroundings, the social life and, above all, state of mind is what made, for me, the conversation that we were having on his bar’s terrace memorable. The Englishman shapes his projects around such emotive factors as ambitions, prejudices and the memory of the people he will encounter. If architecture at the start of the century was defined by the Guggenheim’s seismic effect, then the sensitivity of Chipperfield and his buildings, which neither scream out nor hide away but rather engage you in dialogue, are today’s defining features. I know, the question seems a bit pompous, but could we be dealing with the 21st Century’s first strictly great architect? The double title page of the edition that you are holding is, as ever, the fruit of our chronic indecision. On the one side, Chipperfield. On the other, Achilles Ion Gabriel’s house in Majorca. The Finnish designer has a room full of unearthed pieces of classic design and a multitude of rugs, market paintings and assorted furniture. An intuitive, energetic and admirably awkward mixture: the perfect antidote for overcoming the notion of the lounge as somewhere to have a nice hot drink on the sofa with a rug and box set on. At lease this summer. Enjoy your read.