A collection that explores the visual displacement of volume, rugs that shift, push and pull their boundaries, breaking traditional shapes and spaces, responding to the objects around them. A prolific drawer, Mohaded began his process for the Fuga collection by sketching. The Argentine designer drew literally hundreds of drawings, each treated as an experiment, developing his concept and ideas. 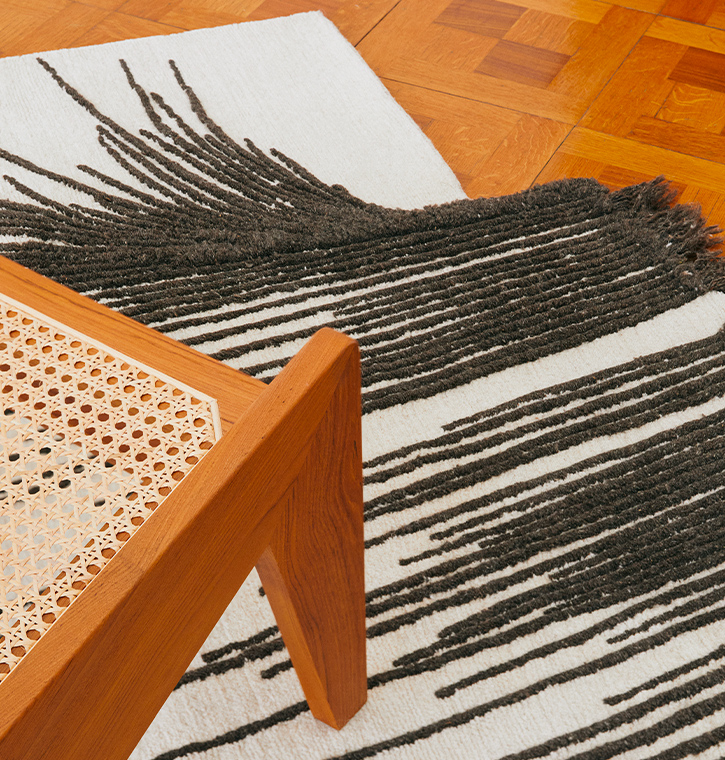 "FUGA is about energy that expands in the fabric through each of its knots, almost like blood flows in our bodies. I worked on literally hundreds of drawings, experimenting with different ideas, and then defining their concept; everything evolved on paper. A line on a paper can express much more than we think. The action of drawing is a unique moment and time between the mind and the hands, it is a way of expressing ourselves that can define us and also allow us to find ourselves. Simple and delicate markings became merely a consequence of the shifting mass I was moving on paper. I was curious about the movement, the flow, the dynamic energy that can be created when borders become blurred, or rather when borders are broken. Escape has no limits, it breaks form. A collection that plays on its power of attraction, creating a connection with the space and the people around it."
Cristián Mohaded

A prolific drawer, Mohaded began his process for the Fuga Collection by sketching, the Argentine designer drew literally hundreds of drawings, each treated as an experiment, developing his concept and ideas. Mohaded was interested in the visual displacement of volume. Simple and delicate markmaking became merely a consequence of the shifting mass he was moving on paper. He was curious about flow and in the dynamic energy created when a mass can reach its breaking point, expanding beyond its borders. Whether the volume is moving from within or being attracted from without, these forces manipulate the object creating an organic design which was never preplanned. The final result is a collection of 3 rugs, which delicately use undyed Himalayan wool to translate the mark-making of the designer. Each one shifting, pulling and pushing its own boundaries, breaking traditional shapes and spaces, responding to the objects around it.
Anno

Ombra, an immersive experiment with shadow, where objects and the imagination float or even fly.

Asad-Bakhtiari has always been fascinated by arrows and their power.