Get in touch directly with Gervasoni

Vibrations, sounds and colours, elements laden with suggestions that distinguish the natural environment all inspired the Italo-Thailandese designer Elena Sanguankeo in the creation of her outdoor rug collection ECHO. 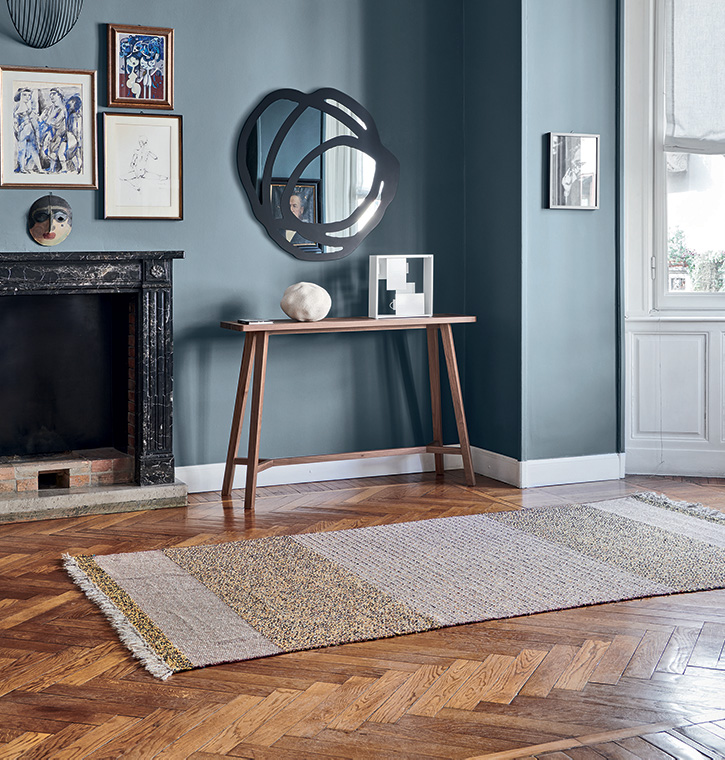 The project is the result of profound research pursued by the company together with the designer. Rugs were initially designed and made on a manual shuttle loom before being developed on a radically re-adapted industrial loom to create patterns with an artisan look. Elena Sanguankeo transfers all her experience in the world of haute couture to the Echo collection, weaving different yarns, colours and stitches, giving rise to three versions: "Green Contrast", combining an orange-blue bouclé with a green-turquoise melange band, "White Contrast", made from a rope coloured bouclé and a white melange band, and "Natural Contrast", featuring a yellow and periwinkle blue bouclé accompanied by an earth-coloured melange band. The synthesis of tradition and innovation is also palpable in the choice of materials: jute and propylene are both suitable for outdoor use and are water resistant. A collection of fresh, lightweight and transportable rugs that define outdoor areas, vibrating with surrounding nature.

Gervasoni dedicates its outdoor collection to all the different ways of imagining the pleasure to spend time in the open air.

A project in which comfort and functionality are perfectly expressed through the creation of ever-new compositions.

Contrasts of light and reflections characterise the Next 141/144 coffee table family.

The new LOLL collection designed by Paola Navone, conveys an idea of contemporary comfort, made unique by the special attention to detail, quality of materials and exclusive artisan workmanship.

The Ghost upholstered items are evolving: "Second Life" icons thanks to their removable cover, they are now made with certified - recycled and recyclable -  materials and renewable sources.