Get in touch directly with Pianca

The bed appears to derive from a single pen-stroke, its curves flowing seamlessly into metal feet, in a supremely delicate yet natural contrast of materials.

The upholstery is light and carefully measured, the product of Philippe Tabet’s design style and the skilled hand of the master craftsman who created it.

A metal frame combines with an aluminium alloy base, with a metallic or matt finish, in black and white. The headboard, available in two different heights, is made of polyurethane foam with a fixed fabric or leather cover. 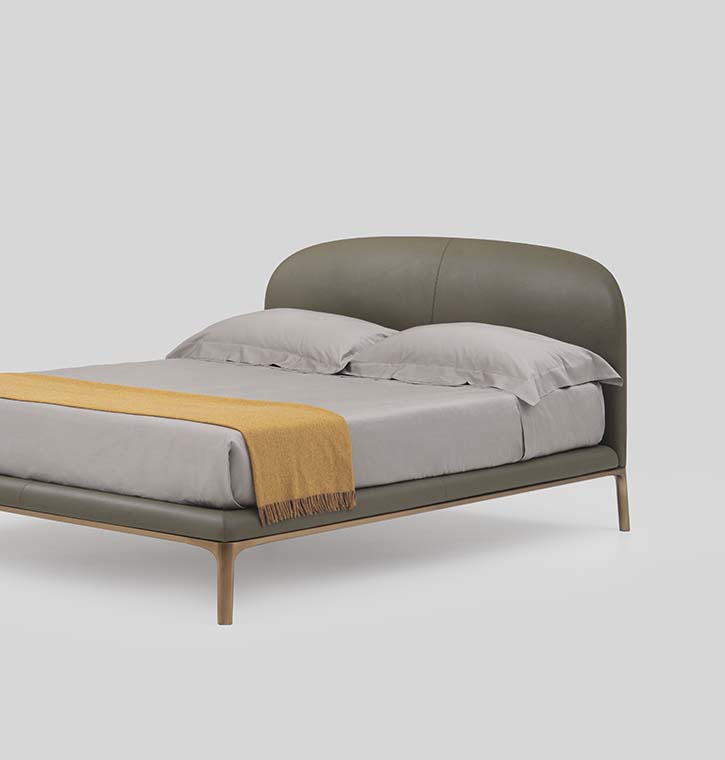 The Rada bed comes in a wide range of finishes that make it a versatile product, perfectly suited to satisfy different tastes and cultures. The structure finished with glossy Cromo and light Fenice fabric upholstery creates a contemporary bed, whereas the combination of Bronzo finish with the green shade of Doge sustainable leather turns Rada into a prestigious, luxurious piece of furniture.

Philippe Tabet is a designer who loves images more than words. His style of communication is dry and essential, like his objects, which seem unable to be different from the way they are.

“When I’m designing, I like to remove everything that can be considered superfluous”

He sketches freehand and manages to makes his objects come alive on a piece of paper with a pencil. He has the ability to trace out the character of a chair, and describe, through its shape, the story that makes it unique. He was born in Versailles and studied in France, but chose to set up his own industrial design studio in Milan in 2015. Philippe Tabet’s ability to imagine something that was not there, combined with a deep respect for the authenticity of the materials, guided him in the new collections he designed for Pianca.

Details that transform into distinctive features in a new take on proportions and function.

The new seat designed by Cristina Celestino for Pianca unfurls like a flower in Spring.

Italian craftsmanship fuses with Japanese style in an armchair deeply infused with references and tactile experiences. A new complement is added to the Fushimi collection.

Minimalism and versatility become freedom to customise and furnish.

The simplicity of its design conceals interesting and well-gauged geometric and constructive choices that explore and exploit the theme of the circle and symmetry.

The great mix of artisan tradition and design.

Philippe Tabet has cleverly produced such a refined and interesting design that Orchestra is eloquent and attractive from any angle.

Flowing surfaces, as simple as the material they are made of. The collection of Pianca door front is enriched by Murano, a homage to the timeless appeal of Murano glass.

Elegant and sophisticated, the Cornice sideboard borrows its name from the eponymous wardrobe in the Pianca collection, scaling down its salient features to suit its new purpose.

Haik presents itself as a harmonious blend of geometric shapes, able to reflect and play with the light of its beautiful metallic finishes, but also to fit with determination in areas essential.

The features of the wardrobes of times past are dressed up with new style, thanks to a contemporary look that still evokes domestic memories.