Italian craftsmanship fuses with Japanese style in an armchair deeply infused with references and tactile experiences. A new complement is added to the Fushimi collection.

A tale of expectations derives from the tangential relationship between the joints. Leather wraps around wood, renewing an ancient collaboration: evocation of new relationships between material and colour. A reinterpretation of the Fushimi bed, the Fushimi Lounge armchair builds on the dominating features of its own inspiration, starting with how the luxurious solid wood is machined and finished.

Designed with simplicity, naturalness and proportion, the Fushimi Lounge chair has a wooden structure that is both concealed and exposed in symbiosis with the main leather section whose meticulous craftsmanship is utterly inviting. 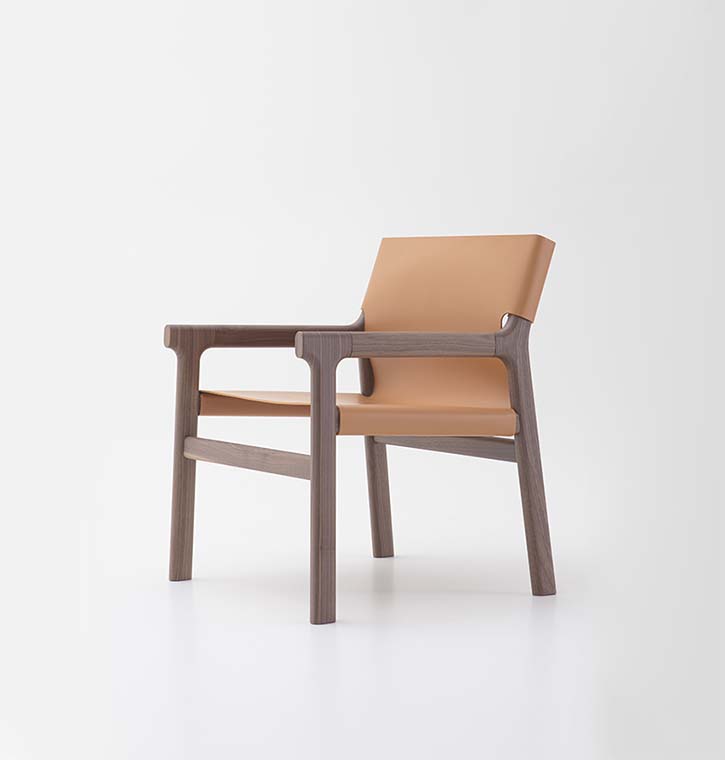 Different styles derive from texture combinations: Canaletto solid wood with natural hard leather creates a pro-duct with a bold classical style. The version in Frassino Nero solid wood instead makes the Fushimi Lounge chair an iconic object, in an homage to Japanese culture and oriental pictograms.

Philippe Tabet is a designer who loves images more than words. His style of communication is dry and essential, like his objects, which seem unable to be different from the way they are.

“When I’m designing, I like to remove everything that can be considered superfluous”

He sketches freehand and manages to makes his objects come alive on a piece of paper with a pencil. He has the ability to trace out the character of a chair, and describe, through its shape, the story that makes it unique. He was born in Versailles and studied in France, but chose to set up his own industrial design studio in Milan in 2015. Philippe Tabet’s ability to imagine something that was not there, combined with a deep respect for the authenticity of the materials, guided him in the new collections he designed for Pianca.

As a tribute to Sunday, the day of rest, the Domenica bed invites you to relax and recline in a solid, warm and protective embrace.

Its classic-inspired forms are reassuringly solemn, distinguished, yet also inviting.

Haik presents itself as a harmonious blend of geometric shapes, able to reflect and play with the light of its beautiful metallic finishes, but also to fit with determination in areas essential.

An elegant presence with a versatile character: Teorema is a blend of solidity and lightness.

The features of the wardrobes of times past are dressed up with new style, thanks to a contemporary look that still evokes domestic memories.

Arranging a customised space for everything, creating distinctive combinations and balancing open and closed spaces: Spazioteca is the synergy of order, rhythm and proportion.

The rustling of the wind echoes in the silence of nature: a visual reference
to canes, creating light, evocative and reassuring pieces of furniture.

Like a treasure chest, the Amalfi wardrobe opens up to reveal its inner secrets. Not just clothes and shelves, but a home office niche for an unexpected, intimate workspace solution.

Curvy, inviting, solid: the Platea sofa repeats the style of the armchair designed in 2019 by Emilio Nanni for Pianca, reworked with different volumes and dimensions.

Strength and flexibility, solidity and lightness, simplicity and creativity.

The simplicity of its design conceals interesting and well-gauged geometric and constructive choices that explore and exploit the theme of the circle and symmetry.