Get in touch directly with Molteni&C

Molteni&C presents a new version, 30 years after the first Piroscafo.

A new facade lacquered in a warm Spice colour with eucalyptus interiors re-proposes a classic piece in a contemporary version without betraying its origins as a rigorous but functional piece of furniture.
The dimensions reflect current production.

At the 1991 Salone del Mobile, four large compositions were presented, two with a white façade and two in Prussian green, which stood out in the centre of the Molteni&C stand. In 1993, based on an idea by Luca Meda, at the Salone del Mobile, a gigantic Piroscafo, 13 metres long, complete with red and black funnels reproducing a real ship, welcomed visitors.

It can be found in homes and public places such as offices and libraries all over the world. It is used not only as a bookcase or display case for small precious objects, but also in the kitchen. 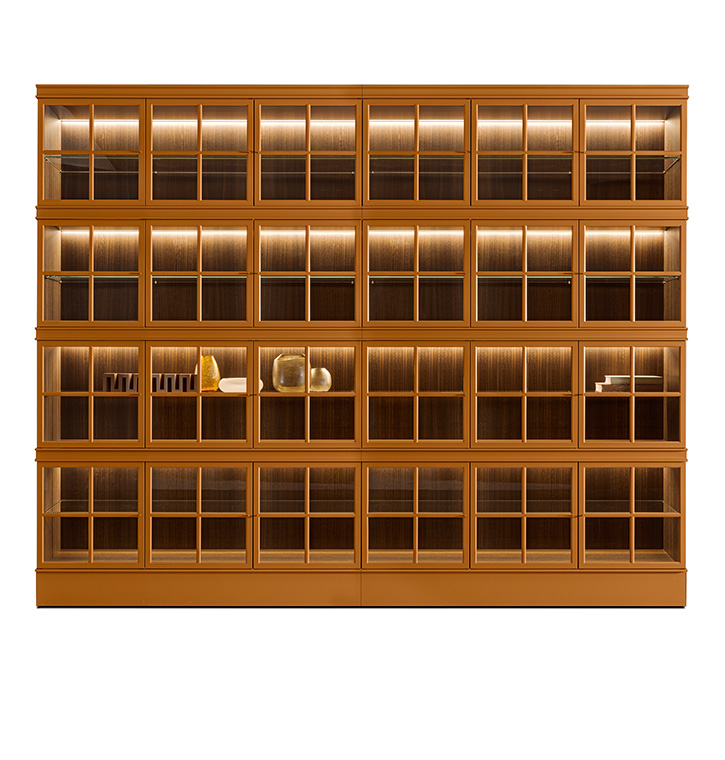 To find the genesis of this original domestic architecture we have to take a step back in time.

On a cold afternoon, two friends, Luca Meda and Aldo Rossi, are walking through the Fontivegge Centre, the headquarters of the Umbria Regional Council. The two friends were talking animatedly and suddenly stopped to look at the large green glass facade next to the former Perugina chimney, a true relic of industrial archaeology. It was the moment of intuition: take the building’s facade and transform it into furniture!

The ‘Dedalo’ rug is characterised by a rigorous geometry and refined colours that are always the protagonists of the design, harmoniously integrating in the new everyday concept of the home.

The armchair, on the other hand, was designed for one of the projects closest to Gio Ponti’s heart, the villa of the Planchart collectors in Caracas (1953-57).

A new coordinated furnishing proposal for the Pass-Word, searching for maximum balance between formal rigour, high technological impact and maximum attention to detail.

Filigree is a range of fixed size and extension tables. Glossy and matt diecast aluminium frames underpin tops enhanced by a wide range of finishes.

Ponti designed this easy chair with slight variants for these ships.

Architecture, a pan virtuosity, acrobatic proportions and an intersection of joints.

MHC.1 is a new edition of the prototype of the first modern piece of furniture made by Molteni&C, the chest of drawers designed by Werner Blaser.

The ‘Corba’ rug stands out for its extremely original pattern, dictated by a figurative design that animates the project by playing harmoniously with lines featuring a strong geometric expressivene

Miss chair, designed by Afra and Tobia Scarpa in 1986. The form is linked to a system of soft, unbroken, linear rhythms.

From Gio Ponti’s house, located in via Dezza in Milan, the small table D.555.1, designed in 1954-1955, is produced by Molteni&C based on the original drawings from the ponti archives.

The Tea chair is a tribute to lightness. The structure, completely made of solid wood, outlines and reveals the profile of the chair in its entirety.

Panna Cotta, at once delicate and heavy, the paradox lies in the use of materials such as marble and iron to achieve a fragile stability.

Designed by Gio Ponti and produced for Altamira, an American company founded by the nephew of the Spaniard De Cuevas, was displayed in the company’s showroom in New York.

Hector Night is a new project dedicated to the night area by Molteni&C. It originates from the Hector bookcase which features a strong modern and flexible expressive character.